Strange Days Books is a cooperative publishing organization based in Crete, Greece.

For the past seven consecutive years, Strange Days Books & eyelands.gr coordinate the only international short story contest based in Greece.  We publish low cost digital editions and our books are distributed mainly through the internet but also through bookstores and cooperative bookshops. Some of our publications are also available in kindle format from amazon.com and in e-book format from smashwords.com
Strange Days Books is an entirely independent publisher, primarily interested in showcasing the wealth of the new writing voices of Greece. We work closely with our authors in order to create books that will appeal to booklovers, books about the present, books contemporary readers can relate to, books that strive to push the art of literature forward, books written with talent and passion, books that challenge the way we see the world, books that burst with new ideas and intriguing perspectives, books that have something to say and were not written for merely commercial purposes. In other words, we create books with character together, steadily growing into a community of artists and art-lovers that represent and promote the truly new literature of Greece, not only through publishing but also through a literary festival, the only international short story competition in Greece, theatrical play and novel competitions, book events and more.
Every summer we organize Sand Festival – a literary festival held literally on the sand of one of the Greek Islands.

EYELANDS.GR
literary magazine in collaboration with Strange Days Books organize an annual international short story competition, which is the only international short story contest based in Greece. Every year, writers from all the continents of the world participate in it. The competition consists of two categories; Greek and International (for the international section we only accept stories in English). The competition has been running continuously for the past eight years, offering hundreds of writers the opportunity to see their short story printed in one of our collections, created through the contest entries. For many of these writers it is the first time that a story of theirs is printed in a book or featured online. The jury reads all submissions blind.
The English section of the competition has been recognized as a truly reliable, fair and serious short story competition. Every year, many reputable websites, post the announcement of our contest, which has earned its reputation year after year, by honoring all its promises, following the rules meticulously and meeting all criteria that allow a contest to gain respect and recognition on an international level.

EYELANDS BOOK AWARDS
In 2018, Strange Days Books & Eyelands.gr decided it was time to launch Eyelands Book Awards and Three Rock Writers’ Residency Program. The former is an international contest that gives the opportunity to a writer to win a great prize; a holiday in Athens, Greece, where he/she will have the chance to talk about his/her work to Greek readers and meet Greek writers in a special ceremony and also gives the opportunity to an unpublished writer to win a contract and see her/his book published by Strange Days Books. It was high time for Greece to have an international book award.

THREE ROCK WRITERS’ RESORT RESIDENCY PROGRAM
Three Rock Writers’ Resort Residency is a self-directed program that offers time and space for writers to work on a creative project of their choice and above all an extraordinary opportunity to enjoy life on Crete. Writers in all creative writing genres are invited to apply. Novels, plays, short stories, poetry, graphic novel, everything is eligible. Our residency is designed for emerging and established writers seeking to dedicate a period of time to a project in any genre. You may choose to stay in a single or shared apartment or in your private studio, at an already well known resort for award-winning writers from everywhere in the world, who have been our guests since 2012. Space is also available for one partner/friend writers would like to bring along at no extra cost

SAND FESTIVAL
Sand Festival is a celebration of literature, poetry, music, art. Every summer – since 2015 – we make an open call for submissions on a specific theme by writers, poets, musicians and all sorts of artists who would like to join us on a Greek island in order to create a spontaneous celebration of creativity! The Festival has taken place in Gavdos, (2015, 2016) Koufonissia (2017)  and Milos (2018) and each year happens on a different beach with camping facilities in order to offer participants the option of cheap accommodation. Participation is free and open to writers and all sorts of artists from anywhere in the world (for writers/poets, submitted texts must be in English). The texts that are selected and read at the festival each year are published in an anthology by Strange Days Books, a publishing cooperative that also organises Sand Festival. This summer the 5th Sand Festival, will take place at the beach of Possidi in Chalkidiki on Friday the 23rd and Saturday the 24th of August. For the first time we welcome submissions by poets and writers from anywhere in the world, especially from Europe. Sand Festival since 2018 participates among the Remarkable Art Festivals in the platform in the platform of European Festivals Association.

STRANGE DAYS IN EUROPE
In 2020 with the support of a Creative Europe program we start our plan to publish prize winning books from countries of Europe that normally would never had the chance to be published in Greek. Starting from spring 2020 we released a novel from Ireland, Ronald Ryans’ ‘’Spinning Heart’’ then one from Denmark by the multi awarded Bjorn Rasmussen, and Erik Satie’s ‘’A Mammals Notebook’’  and in Autumn ‘’The Epic of the morning stars by Rudi Erebara, from Albania and at last an anthology of the Spanish poet and nobel prize winner, Vicente Aleixandre.

Strange Days is a social cooperative group for publications, based in Rethymnon.

Strange Days communicates directly with authors in Greece and abroad without the mediation of other publishing houses, agents or any kind of intermediaries. They do not in any case require a financial burden from the authors, on the contrary, they assign the same percentages of sales rights to all the authors. With digital editions in small circulation, they ensure low cost in all their books with a higher price of 12 euros. We started in May 2013 and so far we have published more than 65 titles. 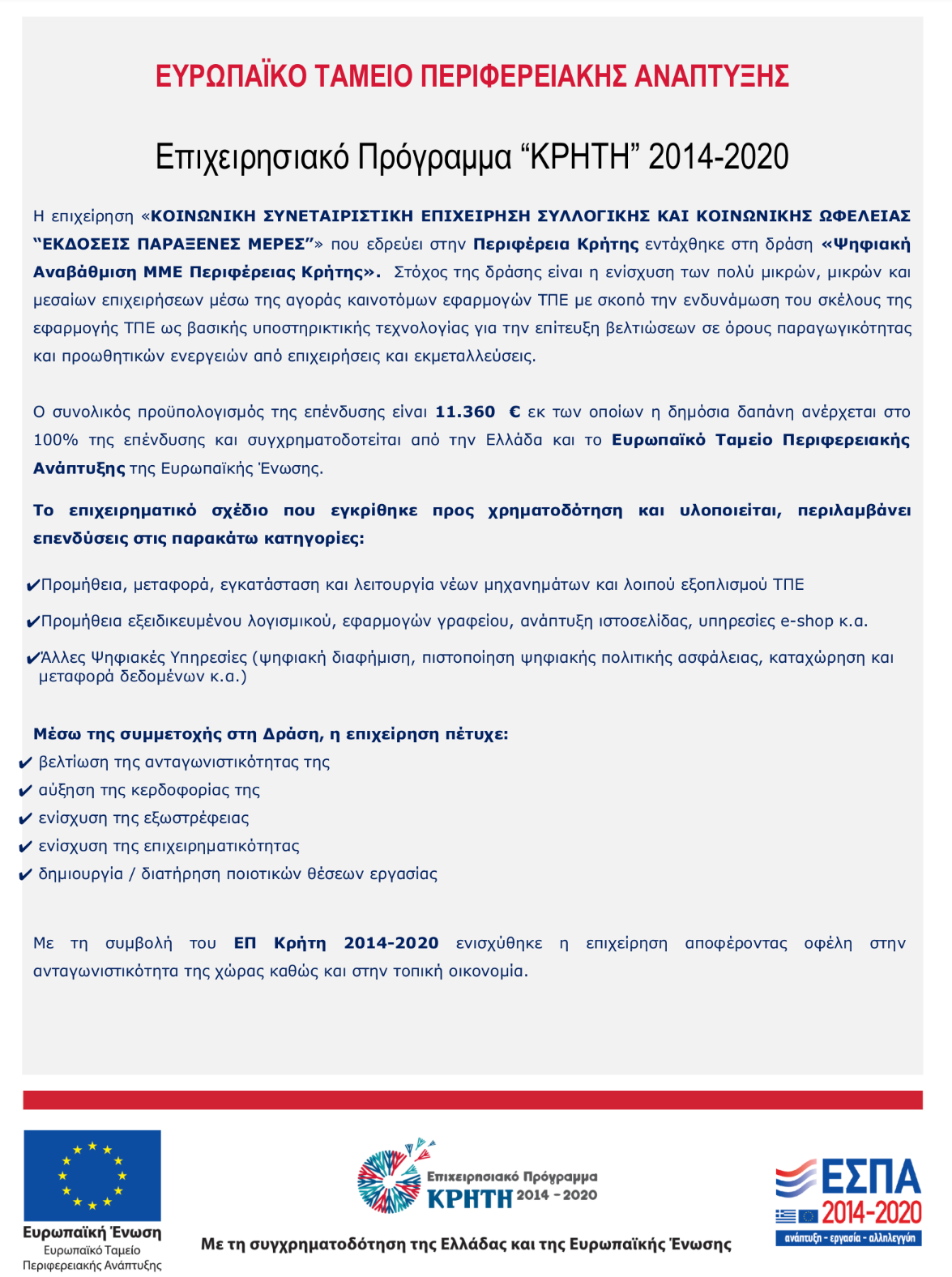